Data security is everyone’s concern but it’s our business to make sure your data is secure and always remains under your control, and your control only.

UNIQUEDOC is registered in the UK with the Information Commissioner’s Office (ICO). The ICO is the UK’s independent authority set up to uphold information rights in the public interest, promoting openness by public bodies and data privacy for individuals. The ICO enforces and oversees the following legislation: Data Protection Act 1998; Freedom of Information Act 2000; Privacy and Electronic Communications Regulations 2003; Environmental Information Regulations 2004; INSPIRE Regulations 2009.

UNIQUEDOC uses Encrypted file storage for content uploaded through the website portal and via mobile devices. This file storage is kept separately from web servers and databases. It is organised across a number of data servers with active mirroring in place for backup purposes. All files being transferred from or to the storage are encrypted with an AES-256 cipher. Keys are also stored separately. 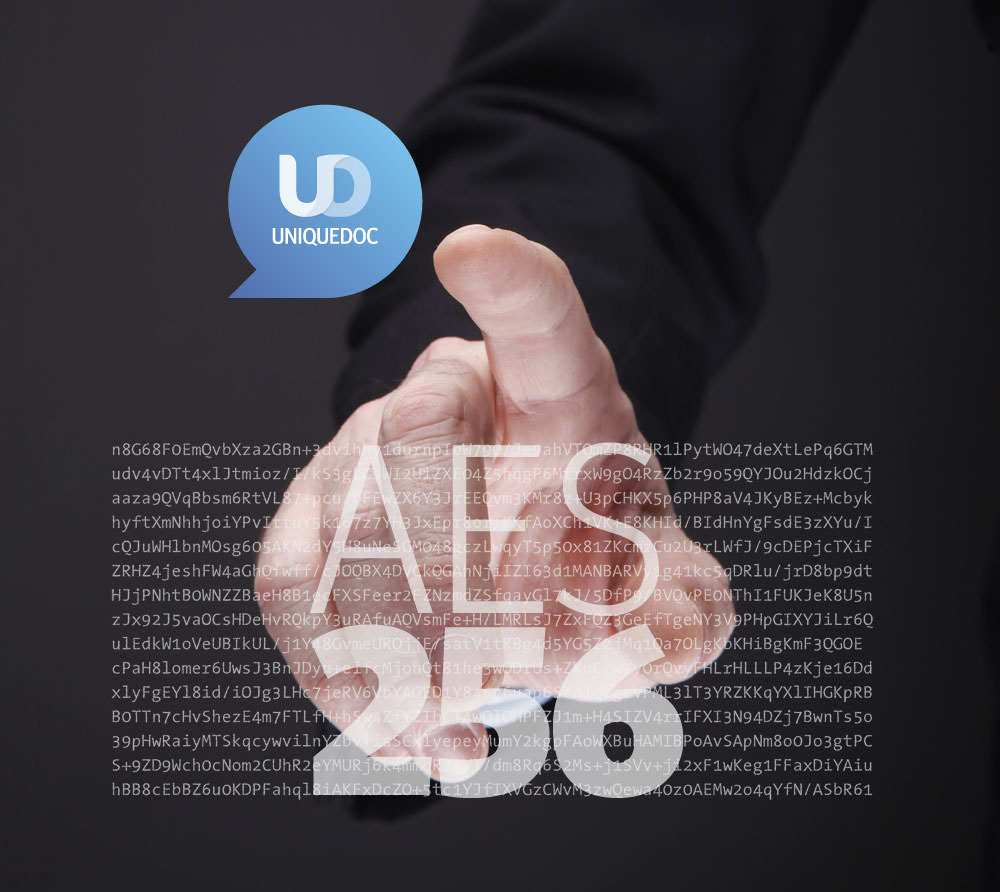 Security is all in the detail!

What is an SHA?

An SHA (secure hash algorithm) is the most common hash algorithm in use. There are currently two different SHA algorithms, both are a one-way encryption and are irreversible. To keep your data safe we use SHA-512. UNIQUEDOC also uses a 512-bit 3rd generation Whirlpool algorithm and RIPEMD-320 developed by a European consortium, which are cryptographic hash functions of strongest encryption level.

AES (advanced encryption standard) is a symmetric key algorithm which means that the ‘key’ used to encrypt the data is the same key that unlocks this data when received. What is a 2048-bit? It’s a certificate that is considered an industry standard and was made mandatory for all internet websites in January 2014. The certificate helps protect websites against hackers that are posing as legitimate internet websites and against malicious viruses on public WiFi hotspots.

What does double and triple encryption mean?

When we talk about double encryption we are speaking about your data as it is at-rest and in transit. Triple encryption refers to any data put into your Secure Vault which has the added security of a password set up by the user (unknown to us and irreversible).

What does it mean to be protected ‘at-rest’?

Data at-rest means any data that is inactive and stored in digital form. This could mean any data stored on servers, databases or on a cloud. Data at-rest is double-encrypted and is never stored on your mobile device.

What does it mean to be protected ‘in-transit’?

How secure are the cryptographic algorithms on the UNIQUEDOC app and website?

They are considered the best in the industry and are the same ones currently used by governmental and military organisations around the world.

Can anyone enter my Secure Vault?

UNIQUEDOC protects you against vulnerabilities like Heartbleed with constant updates and monitoring of the technical state of our hardware, checking our servers to ensure there have been no security breaches, and have employed a third party security company to check for weaknesses in our security system.

If you have any questions about UNIQUEDOC security and collaboration solutions, please get in touch with our team.